BIG SOMETHING ARE GENRE-BENDING GREATNESS WITH THEIR OWN FESTIVAL

This article was originally posted on Indie Band Guru.

This six-piece group is a powerhouse fusing together elements of rock, pop, funk, and improvising that takes listeners through an unheard of musical journey. Together, they’re makings a sound as unique and fresh while still feeling timeless.

Together, Big Something is Nick MacDaniels (vocals, guitar), Casey Cranford (sax, EWI), Jesse Hensley (lead guitar), Ben Vinograd (drums), Doug Marshall (bass), Josh Kagel (keys, trumpet), and Rhett Huffman (keys). They work together creating music that uses anything and everything. From soaring guitars, electronic wind instruments (EWI), to synths, horns, and captivating vocal hooks, Big Something cooks up tracks that are infectious and hard not to pay attention to.

Genre-bending band Big Something is making music that’s inventive and fresh in a music landscape that doesn’t produce new music all the time.

From the sounds of psychedelic rock that feels like Jimi Hendrix has his hands on it, to the simple melodies that flow from John Mayer’s mouth, there’s a feeling hidden in Big Something’s music that attracts every kind of listener. Within each track, you can hear the different instruments coming working to bend genre norms and create a sound that only this band could produce.

“Sometimes we don’t quite know where an idea is going to go,” said MacDaniel. “Once we have some riffs to play with, we begin as a group to organize our arrangements. The blending of different genres and sounds stems from our various musical tastes and influences which span across a broad spectrum of the music world.”

This idea is seen on their 5th studio album, The Otherside. An album that builds upon the post-apocalyptic imagery from Tumbleweed, it also follows a story of a nomad who has made his journey wandering through the night towards a desert sunrise.

“Some of the material on this album had actually been in our back pocket of undeveloped ideas for quite some time. We marinated on a few riffs and chord changes for months until solid structures were formed,” said Cranford.

If you’ve never listened to anything by Big Something, The Otherside is a perfect introduction. Only 8 tracks long, it transports you to another world. An album packed full of fresh musical ideas, it’s hard not to be captivated every second of its 48-minute listen time.

“We wanted this album to fit perfectly on a vinyl record and flow together where listening to the whole thing is an experience and journey,” said MacDaniels. “You basically get 20 minutes per side on a vinyl record so that ended up being 4 tracks per side for us.”

If you’re listening to the album, it’s hard to notice that none of the tracks fit your ‘standard 3-minute track’ that dominates pop radio because you’re sucked into the melodies as long as they’ll have you there.

“Some songs work really well as ‘jam-vehicles’ where there is open space and room to let the band take the groove on a drive / build the energy etc. With those songs – you kind of just let them be and don’t worry about song length,” said MacDaniels.

Bands like Big Something that write and play until they feel it’s sufficient are re-revolutionizing music. In today’s music landscape, almost every song across genres follows similar patterns, trying to make it and maybe get some radio play. However, Big Something are making music from themselves and finding fans that love their music along the way.

“For us, it’s more about letting the music or the lyrics fully realize their potential,” said MacDaniels.

When they’re not working on new music, Big Something has put together an annual festival in North Carolina. Their annual The Big What? will not only feature more performances from the band themselves but new material and surprise debuts, they shared in a press release.

Big Something announces their 7th Annual The Big What? Festival

The festival has grown over the past seven years and feels like a family reunion to the band now. It’s also the only show Big Something will perform in North Carolina this summer, meaning it’s an entire weekend of homecoming shows for them.

Each year, Big Something produces The Big What?, a festival that features an artistic and musical adventure. Featuring performances from their favorite regional and national artists plus a visual art gallery and more, The Big What? is an immersive experience. 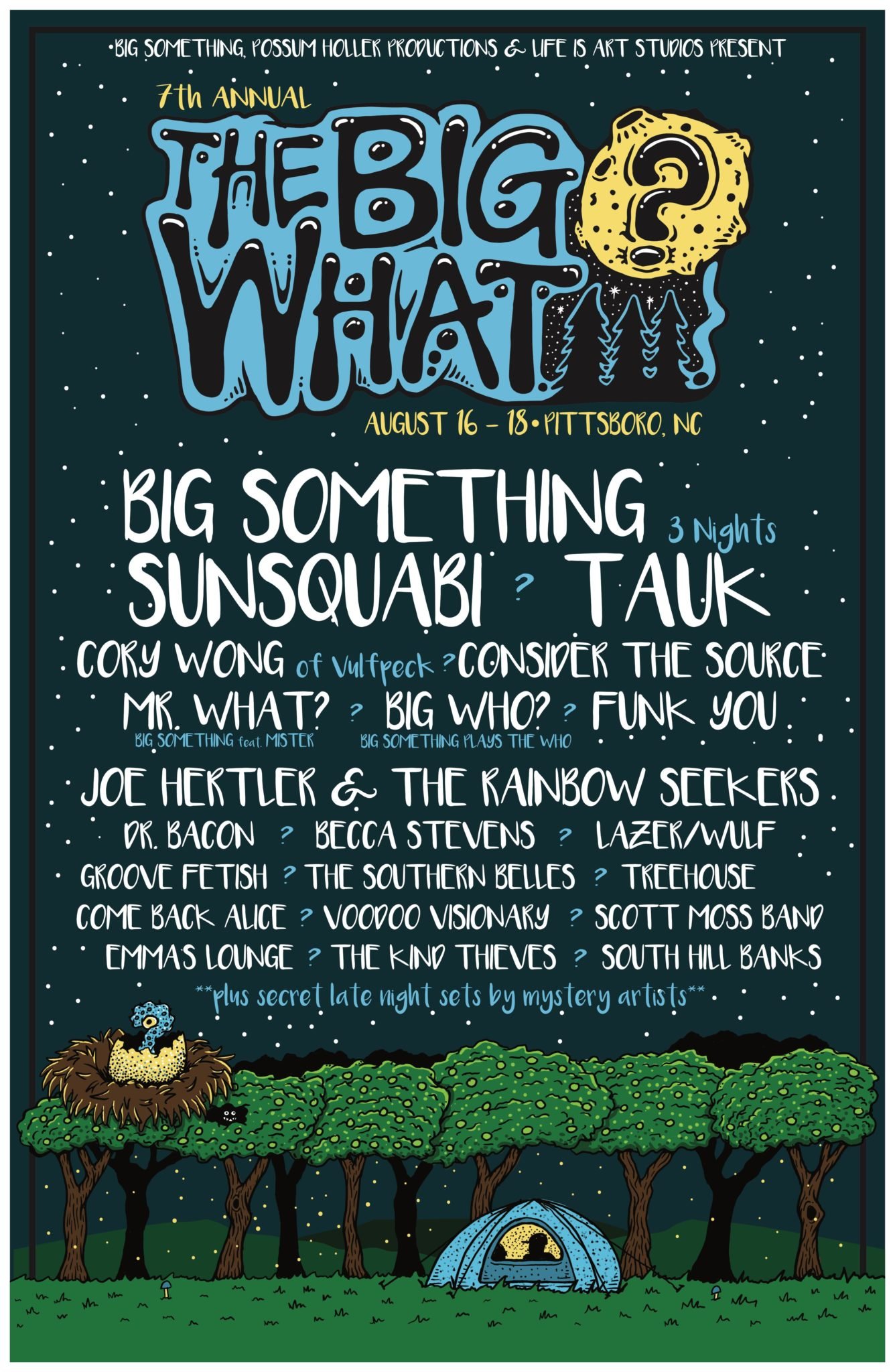 On-site, the festival goes spend the night in wooded, car, or RV camping and wake up to morning yoga and several other guided workshops and activities.

“Well, it’s a three-day campout at a really cool venue in rural NC – lots of great forest terrain for camping. 2 main stages plus secret late-night sets. It’s a party in the woods with a bunch of really fun people. There’s an awesome art gallery. A great collection of craft vendors. There are theme nights with costumes and lots of creative crowd participation,” describes MacDaniels. “We take a lot of pride in the flow of music and how each band transitions to the next. It’s kind of like DJing your own party for 2,000 of your closest friends. Just really a lot of fun and shenanigans.”

Besides at The Big What?, Big Something will be making rounds across the indie festival circuit across the US.

Buy tickets for The Big What? at http://thebigwhat.com/